Who Will Be King? 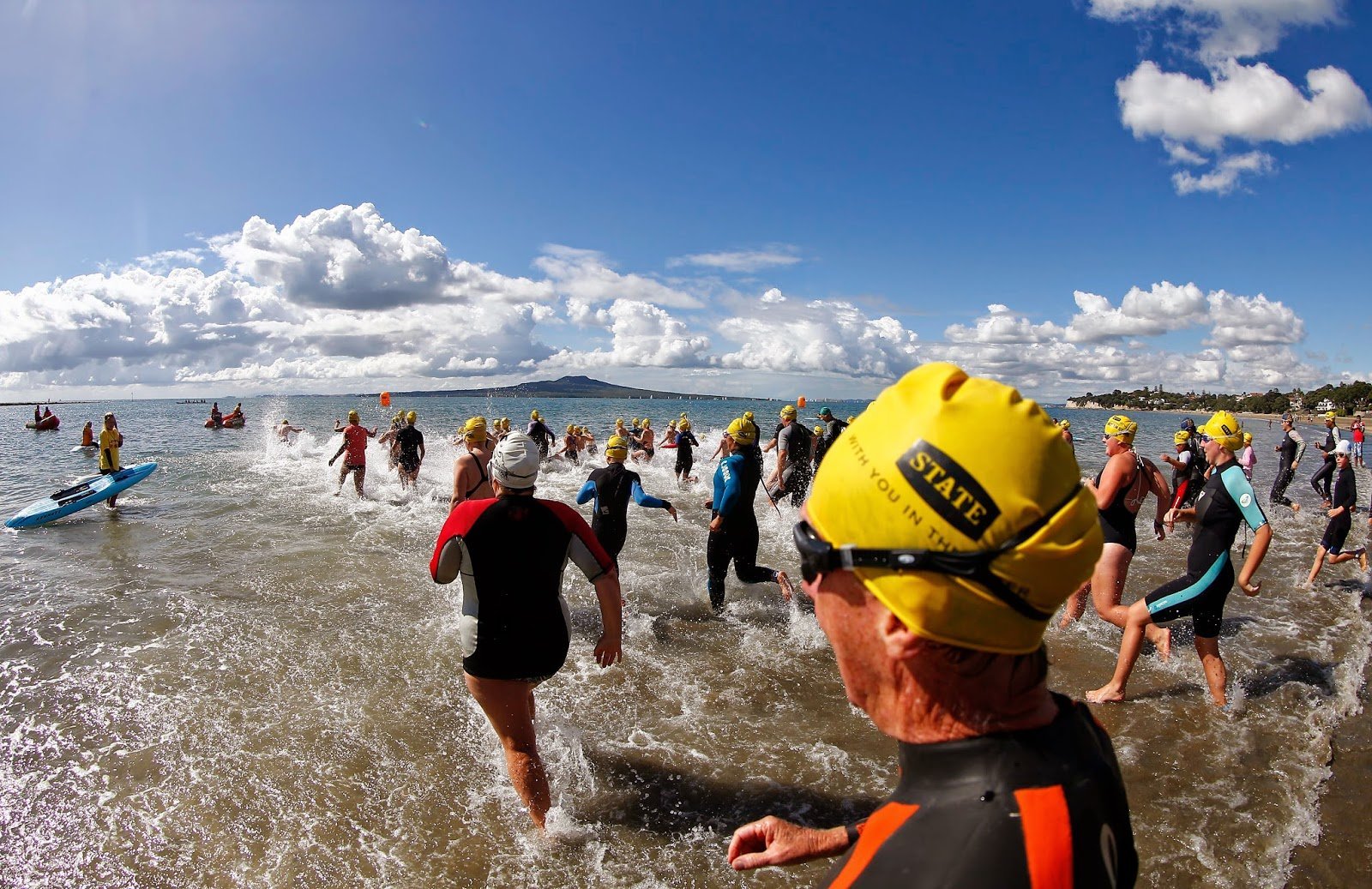 Photo shows the start of the 2013 State King of the Bays race with Rangitoto Island in the background.

$32,000 in cash goes on the line this weekend as Australasia’s open water swimmers line up to conclude the New Zealand Ocean Swim series.

The 2.8 km State King of the Bays on Auckland’s North Shore is the sixth and final round of the State New Zealand Ocean Swim Series. The race will line-up all of the stars of the series with the exception of current Australian 10 km champion Jarrod Poort who is injured after breaking two bones in his wrist in a skateboarding accident.

“This is the climax to what’s been the most fascinating elite series we’ve had,” said event director Scott Rice. “The quality of swimming in both the men’s and women’s series has been top notch and we’ve been delighted to attract more quality Australians over to New Zealand than ever before.”

Leading the series on the men’s side going into the climax is New Zealand’s number one open water swimmer Kane Radford. 100 points are awarded to each race winner, but points count from just three of the six races. With double points offered in the King of the Bays, the final standings are set to be markedly different after the race concludes. Despite currently being sixth in the series, Australia’s Rhys Mainstone is on a roll heading into the finale with his victories in the State La Grande Classic in Akaroa and the State Sand To Surf in Mt Maunganui.

Mainstone will claim the title with the maximum 400 points if he wins on Saturday. “It’s good going into the final race of the series in the position I am in. But obviously the competition is hot and with a few of the pool swimmers returning as well, they will all put up a good fight so it’s going to be anyone’s race.”

Both the winning man and woman will receive $10,000 with the title. “I’m going to give it all I can in this last race because of the big prize purse, which means a lot for a swimmer like me,” Mainstone said.

Others in with a big chance are Queenslander George O’Brien who won the State Capital Classic in Wellington in January, and pool specialists and 2012 New Zealand Olympians Dylan Dunlop-Barrett and Steven Kent who will both be fresh from competing in the New Zealand national pool championships on this week. Both are also former champions of this race with Dunlop-Barrett winning in 2011 and Kent in 2010.

On the women’s side, Auckland teenager Paige Schendelaar-Kemp must hold off the overwhelming favorite to claim her third straight series title, 28-year-old Queenslander Melissa Gorman. The 2009 5 km world champion and two-time Commonwealth Games medalist has been in dominant form despite only recently returning from shoulder surgery. She won both races in Akaroa and Mt Maunganui. “I’m excited to be heading into the final race with two wins under my belt so that takes the pressure off a little bit, but it’s definitely going to be a tough race with everyone wanting to win that prize money.”

Gorman’s main challengers are expected to be Taranaki’s Charlotte Webby and Wellington’s Emma Robinson, who won the State Harbour Crossing and State Capital Classic respectively, and another Australian Jessica Walker, who will represent her country at the Pan Pacific Championships on the Gold Coast in August.

1,500 swimmers will compete in this year’s State King of the Bays in its 11th year. The main 2.8 km race starts at Milford Beach and finishes at Takapuna Beach.

* not swimming this final round