Who Will Ever Cross The Bering Strait Again? 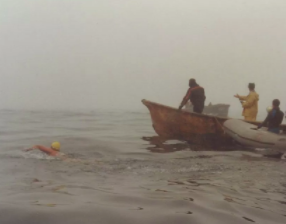 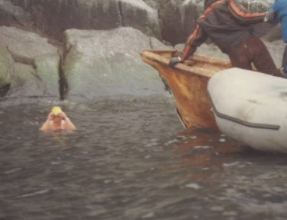 “Nobody else will ever do this [crossing],” said project director Coplan in 1987. “Not in a hundred years. She’s the only one.”

While Coplan’s prediction was not eventually proven true, the impact of Cox’s swim was like a 100-year occurrence. At the time, replicating her crossing was unthinkable. Her feat just could not be replicated – or so it seemed for most of humanity.

For most…but not all.

Swimmers like 17-year-old Russia Elena Guseva (in 1998) and fellow Russians Alexander Brylin and Grigorii Prokopchuk (in 2 hours 7 minutes in 2014) were inspired by the 30-year-old American and strove to replicate by her swim.

“Cox inspired more than just three Russians; the impact of her swim helped kick-start the entire ice swimming community and others who do extreme swims and people from all walks of life thinking about, attempting and completing their own dreams on dryland,” said Steven Munatones. “Her achievement gave many the impetus for them to expand their own horizons and try extremely cold water swimming.

Her 1987 crossing also – eventually – planted the seed for the Bering Strait Swim, a six-day relay from Chukotka, Russia to Alaska.
“