Why The NCAA Should Add Open Water Swimming 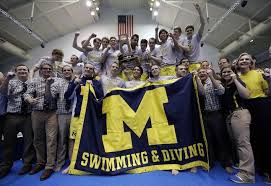 March Madness is coming to an end with the Final Four taking place in Atlanta this weekend. The collegiate experience and nature of college students at NCAA Championships is always exciting and compellingly competitive.

It is acknowledged as one of the world’s greatest aquatic competitions with a rich history of showcasing world champions, world record holders, Olympians and Olympic champions from dozens of countries.

And we very strongly believe there are many reasons why open water swimming events should be added to the schedule as soon as possible.

2. There are many more open water swimmers than divers and certainly more around the world. [Note: the international influx of non-Americans at the NCAA Championships cannot be denied with a large number of finalists and qualifiers who are citizens of countries other than the USA).

5. The sport of open water swimming is exploding at all levels.

6. The sport of open water swimming has been successfully incorporated in the FINA World Swimming Championships with 5 km, 5 km Team Pursuit, 10 km, and 25 km races being conducted.

7. The sport of open water swimming has been successfully incorporated in the World University Games schedule by FISU ( Fédération Internationale du Sport Universitaire) with a 10 km race.

8. The addition of open water events can help showcase the host city in myriad ways. Think of a coastal race at a city along the Eastern Seaboard or West Coast. Think of a lake swim throughout the Midwest. Think of a river swim in the Rocky Mountain region.

11. Excitement is the name of the game at the NCAA men’s and women’s championships. Open water swimming competitions certainly follow that formula with most races between 5 km and 10 km coming down to the final few strokes in addition to the brutal physicality of aggressive swimmers going around turn buoys, into feeding stations and barreling towards the finish. Capturing these mano-a-mano battles and photo-finishes by aerial footage and close-up cameras will provide outstanding footage for print magazines, online properties and television.

12. The cost of holding these open water swimming championship events is absurdly low relative to every other sport governed by the NCAA. The cost of holding an event in a lake, river or ocean is limited to a city permit, lifeguards, a feeding station, escort boats, media access, and a start/finish pontoon. 13. The know-how how to conduct an open water swimming championship event is available in all 50 states throughout the United States.

Now is the time. Plan for success and prepare for the future of open water swimming events at the NCAA Men’s and Women’s Swimming Championships.