Why Stephen Redmond Will Do It…Why He Will Not 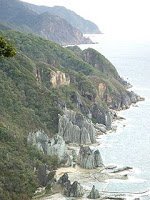 The marathon swimming world – and much of the Irish public – will be riveted to Stephen Redmond‘s courageous attempt to complete the Oceans Seven scheduled tonight at 9 pm GMT. He can be followed stroke-by-stroke by his GPS tracker here.

But we took creative liberties and imagined why Redmond will be successful…and why he will not. Only time will tell which will come true.

Why he will be successful:

1. It is relatively a short swim. It appears that Redmond’s chosen straight-line course is a bit over 30 km, a mere warm-up for the famed marathon swimmer who has already completed longer, tougher swims in the North Channel, Molokai Channel and English Channel.

3. Starting out in calmer waters of Mutsu Bay (see one possible starting point above), his escort crew will intelligently utilizing the powerful currents to push Redmond from the island of Honshu, on the northern reaches of Aomori, towards Toi on the island of Hokkaido, just east of Hakodate. Since the massive flow of the Tsugaru Channel moves from west to east, Redmond will be steered into the eastward-flowing currents and be able to ride them towards Hokkaido.

4. Although the water is described as cold by the locals (between 10-15°C), the water temperature is warm compared to the Irish coast where Redmond conducts his daily training sessions back in Ireland.

5. Marine life will be interesting, but not dangerous. No box jellyfish or Lion’s Mane for Redmond out in the Tsugaru Channel. About the only thing that he may see are a sea of squid swimming gently beneath him during the evening hours. With so much sea life in the fast-flowing current, the Men in Gray Suits have better things to look for that an Irish swimmer cruising along the water’s surface.

6. He is relentlessly stubborn. It is not a matter of IF Redmond will make it; rather it is a matter of WHEN. He proved his grit in the North Channel and Molokai Channel; he proved his strength in the Catalina Channel and Cook Strait. His crew, led by Haruyuki Ishii, is experienced and knowledgeable. The support crew includes film crews that are following him from Red Bull and the fever-pitched Japanese media, may have some problems with seasickness and potentially rough seas, but Redmond will forge on, enjoying the challenge with full intent not to let his family, friends, community, media and the global marathon swimming world down.

7. The power of his mind. Redmond has already envisioned success. He has seen himself walk up on the Hokkaido shore. When the conditions are tough, he prays and relies on the power and inspiration that is generated by his family. His brain, through the force of his will, manufactures a sustained adrenalin rush that empowers him to push beyond the reasonable.

Why he will be not be successful:

1. Winds are forecasted to be over 10 knots in the later parts of his swim, although he will enjoy smooth seas in the early going. While this is not the ultimate obstacle facing Redmond, it appears the winds may go in the opposite direction of the Tsugaru Channel currents. If this is true, the whitecaps will result. The turbulence will be a forceful impediment, probably similar to the angry seas that Redmond faced on his first (failed) attempt across the Molokai Channel in Hawaii.

2. While Redmond alone could probably make it in exceedingly rough seas. He proved what is possible during his unprecedented swim around Fastnet Rock and his latest crossing of the Molokai Channel, but his crew may pull him out for their own safety reasons.

3. Because there is so much attention in Japan on Redmond’s swim and the winds may be blowing in the opposite direction of the currents, the Japanese Coast Guard will be very careful so no unreasonable risk is taken. With the eyes of the media on the escort crew and Japanese Coast Guard, if things get dicey, they may pull Redmond just to err on the side of caution.

4. Things happen. The unexpected will occur and Redmond, a bull of a man, has no chance against an angry Poseidon.

It will be an adventure, but our bet is that Redmond finishes within 13-16 hours and history will be made on Saturday, June 16th somewhere along the southern shores of Hokkaido with Japanese cameras capturing it all for posterity.