There were no surprises at the opening race of the 2012 FINA 10km Marathon Swimming World Cup series – it was a totally exciting, down-to-the-finish, wild, crazy sprint among the world’s elite in the ocean course in Santos, Brazil.

In the Olympic year, every race among the elite competitors is going to come down to a furious finish where every navigational and tactical mistake is magnified and every last meter of hard training will be needed.

Training regimens, tactical plans, navigational decisions and nutritional habits will be reviewed as a result of the first race of the 2012 World Cup season.

For every happy podium finisher, there are dozens of other swimmers who are left to wonder, “Why if I had…” 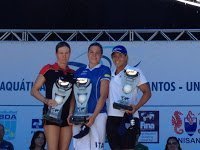 On the men’s side, one of the Olympic Marathon Swimming 10km gold medal favorites, veteran Spyridon Giannoitis knew his plans and followed them through to the finish. Spyridon threw down the first gauntlet of the 2012 season when he emerged victorious over Nicola Bolzonello of Italy and Richard Weinberger of Canada. Both Nicola and Richard demonstrated they also have the right stuff to be in thick of the medal hunt at the Olympics if the rest of their 2012 campaign plays out like their Olympic dreams.

“The ultimate goal for me to be a medal contender at the Olympics,” said Richard who swims an average of 100K per week. “But before I achieve that, I need to focus attaining the little goals that my coach and I have established. Training hard and achieving my race plan is constantly the focus of what I want to accomplish, and wining the race will be the result of all the hard work.”