Will The Big 2 Finish 1-2 At USA Swimming Nationals? 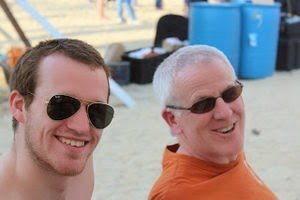 The Big Two face off with each other and 32 other men at this week’s USA Swimming Open Water National Championships in Miromar Lakes, Florida.

But all their previous victories means nothing in the do-or-die, winners-take-all 10 km race where only the top 2 men will advance to the 2015 FINA World Swimming Championships in Kazan, Russia. The pressure-packed race is the only route to the Olympic 10K Marathon Swim; finish third and there will be no racing in Copacabana Beach at the 2016 Rio Olympics.

While there will undoubtedly be surprises during the race, Gemmell’s overall stamina and speed and Meyer’s savvy and strength will put them in good stead. But the two will have to deal with another savvy pair from Team Santa Monica, Jordan Wilimovsky and Brendan Casey who will have a Plan A, B and C ready to roll out. They will also have to deal with Arthur Frayler, David Heron, Joey Pedraza, Chip Peterson, Ryan Feeley, and Sean Ryan who will all take shots at pushing the pace and with definitive shots of winning.

Whatever pair comes out on top, it will undoubtedly be one of the closest and most strategic races on American waters unless someone like Gemmell or Wilimovsky make an early break that the lead pack cannot maintain. With so much at stake and with so many top swimmers devoting years of training to this race, the race will be entertaining to watch on the live webcast available online via usaswimming.org.

For information on the women’s race, visit here.