Will The Gas Evaporate On British Swimming? 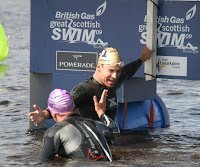 The investment seems to be a wise one with so many thousands of people becoming more physical and more fit.

But as one board member mentioned in private, “British Swimming is run like a corporation. Investments are made based on specific plans that lay out goals. And results are expected as a result of those investments.”

While the overall massive increase in swimmers, specifically open water swimmers, can be documented, the results are reviewed from the perspective of the number of Olympic medals won.

UK Sport set a target of 5-7 medals at the 2012 London Olympic Games based on a £25.1 million budget, but the British swimmers only won 3 medals – 2 bronze and 1 silver in the pool. As a result, a review will be conducted and, according to the British media, it could mean that British Swimming will face a funding reduction in the 2016 Olympic quadrennial. “Following our collective disappointment at not meeting our high expectations at these Olympic Games, we will be undertaking a thorough performance de-brief,” said British Swimming Performance Director Michael Scott who will remain the chief through the 2016 Rio Olympics.

“In the Olympic cycle to London, the British swimming team has achieved best ever results at World, Commonwealth and European level but in London we failed to continue this trend and we need to fully understand why,” he explained. “In order that we can continue to improve as a swimming nation, this will be done quickly but thoroughly with a view to completing by the end of October.”

With so many events happening in Great British and so many British citizens swimming and becoming more fit in the build-up to the London Olympic Games, it appears the overall social benefit of the Olympic funding has some very real and concrete social benefits. While the established goal of 5-7 medals was not achieved, at least 2 fourth-place finishers missed the podium by only tenths of seconds. Additionally, there are a number of young up-and-coming British swimmers who can make their mark in Rio.

The decision of continued funding will be announced in December.