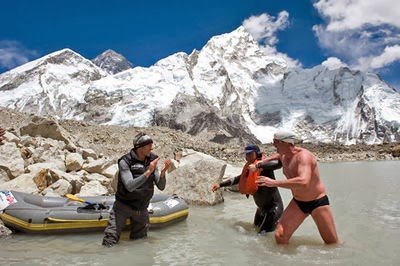 We had absolutely fascinating discussion and lunch with Juan Enriquez, a former swimmer and water polo teammate who was the founding director of the Harvard Business School Life Sciences Project.

He is written on global nucleotide data flow, gene research and national competitiveness, and was a member of Celera Genomics’s marine-based team that collected genetic data from the world’s oceans.

He is a Managing Director at Excel Medical Ventures, a life sciences venture capital firm, and the chairman and CEO of Biotechonomy, a research and investment firm helping to fund new genomics firms. In his Homo Evolutis, Enriquez explores the far reaches of human change and explores the possibilities and realities of human evolution.

When we observe how fast, how far, how deep, how cold and how old people are swimming around the world, Enriquez’s thoughts and ideas seem entirely plausible.

As Enriquez explains in his TED talk, “The normal state of affairs is to have various stages of humanoids walking around. Humans continue to mutate.”

Swimming long distances, swimming in extremely cold water, swimming for days, swimming during one’s advanced years is not something most humans do. But some people do.

Look at Henri Kaarma, Kevin Murphy, and Lewis Pugh. Think about what Greta Andersen, Lynne Cox, and Angela Maurer do. These athletes are at the cutting edge of what is possible…and they are examples of what the aquatically-oriented humans will do in the future. Will our bodies and minds adapt to swimming at the level which these swimmers have set? We believe so. The human bodies and mind will certainly adapt and evolve.

And these changes may come sooner than we expect. Enriquez asks, “Throughout human evolution, multiple versions of humans co-existed. Could we be in the middle of an upgrade right now?” Rapid evolution – with open water swimmers on the front lines performing in some of the most difficult environments possible – may be under way.

Photo above shows Lewis Pugh finishing his 1 km swim on Lake Pumori on the Khumbu Glacier on Mount Everest in May 2010 at 5,200m altitude.