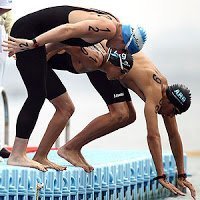 FINA is reportedly considering the concept of mixed-gender relays for its pool events at the 2012 Short Course Worlds and the 2013 World Championships. This news comes in a report on the FINA Technical Swimming Committee meeting that was held in conjunction with the 2011 World Championships. The addition of the events was under consideration due to the events inclusion at the 2010 Youth Olympics.

This is one unique example of the possibility of the pool following the lead of the open water. FINA’s mixed-relay concept has already been added to the open water swimming world where a 3-person, mixed-gender 5 km team pursuit race was held at the 2011 World Championships.

Additionally, mixed-gender relays, from the English Channel and Catalina Channel to the Trans Tahoe Relay and Maui Channel Swim, have been around for decades.