Will A SEAL Be Able To Follow Penny Palfrey? 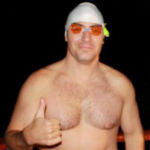 To date, Palfrey has been the only person to complete this 64 km crossing. Under horrendous conditions, Palfrey completed the swim in 17 hours 53 minutes on September 25th 2009. Nearly 4 years to the date, Scott will enter the same waters that Palfrey conquered with the same goal to walk onshore somewhere along the California coastline.

For months on end, Scott has been training 5-6 times per week in the Pacific Ocean before the sun rises. In the darkness before work and not to take away from family time, he starts from La Jolla Cove and puts in his workouts and miles near San Diego, California. This weekend, he will hope for the best conditions possible, but like a well-prepared Navy SEAL, preparing for the worse.