Will University Of Tennessee Distance Guys Go 1-2 In 25K? 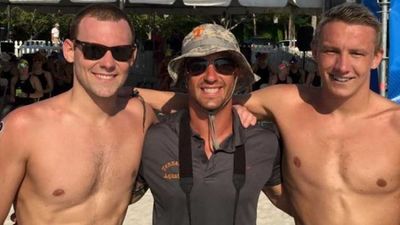 Will University Of Tennessee Distance Guys Go 1-2 In 25K?

Does USA Swimming and University Of Tennessee coach Tyler Fenwick know something about Saturday’s 25 km marathon swim at the 2015 FINA World Championship that others do not know about?

Perhaps. He certainly has a strategic plan in place.

Fenwick coaches both Alex Meyer and David Heron at the University of Tennessee and the training partners may be planning to go 1-2 in the 25 km.

Heron finished sixth and Meyer finished 11th in the 5 km race earlier in the week – and the 25 km is more in line with their talents.

But Heron and Meyer have a tough field to beat, especially including a pair of fast-swimming Frenchmen (Marc-Antoine Olivier and Alex Reymond), a pair of veteran Italians (Matteo Furlan and Simone Ruffini), an intense duo from Brazil (Diogo Villarinho and Allan Do Carmo), and the always tough Germans (Andreas Waschburger and Alexander Studzinski).

The last nine editions of the men’s 25 km at the FINA World Championships have been won by nine different swimmers. Thomas Lurz of Germany, the winner in 2013, has retired.