Winter Swimming In Lake Arrowhead Dates Back To Crabbe

Winter Swimming In Lake Arrowhead Dates Back To Crabbe

Buster Crabbe was a two-time Olympic medalist (1928 and 1932) and a famous movie star and television actor who starred in a number of popular films in the 1930’s and 1940’s. He also played the title role in the serials Flash Gordon and Buck Rogers and was only actor who has played Tarzan, Buck Rogers and Flash Gordon – the top 3 pulp fiction heroes of the 1930s.

Much less well-known in the annals of history, Crabbe was also a successful aquapreneur and an ice swimmer.

According to the local Chamber of Commerce no one in recent memory – going back at least one generation – has ever swum across Lake Arrowhead, a mountain resort east of Los Angeles, California. Renowned for its mountain spring water sold throughout California, the lake has attracted vacation-goers and people who love living on a mountain amid the desert of southwest America for generations.

Crabbe lived in a mountain lodge on the lake shore. According to masters swimmer Phil Cooper, he swam throughout the year in Lake Arrowhead.

“He was swimming nearly every day. The water was close to freezing, especially in winter. But he would be there in the water…there’s Buster swimming across the lake…,” he recalled about the Olympian and actor who also starred in a series of Western movies centering around a cowboy character called Billy the Kid.

Depending on his turn-around point, the lake was at least 2 miles across…at 5,174 feet or 1,577 meters in altitude.

Swimming in the cold, beautiful Lake Arrowhead year-round at obviously paid off. Crabbe remained in great swimming shape throughout his life, later setting a world swimming record in the 60-64 masters swimming age group in the 400m freestyle – the same event that he won the gold medal in 1932. 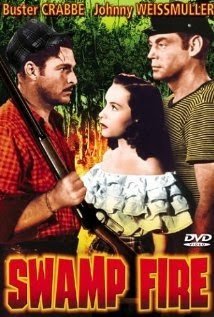 With his heavy work schedule, Crabbe had to stay in shape, especially in 1942 when he starred in 8 movies. He starred in 7 more Billy the Kid Westerns in 1943 in addition to making training films for the U.S. military.

Crabbe recalls the good versus evil theme of his over 45 movies in the 1940’s in this cowboy genre. “The plots [of the Westerns] were simple ones. Basically, there were four standard formats: cattle rustlers, land grabbers, outlaws stealing money or gold, or outlaws terrorizing a community.”

In 1946, Crabbe’s continuous ice swimming paid off when he co-starred with his former swimming great, Johnny Weissmuller, in the movie Swamp Fire. At 42, Weissmuller was no longer in great shape, but the two performed a climactic underwater fight-to-the-death scene as their competitive juices never wavered, even in the ice cold water. Crabbe’s cold water training in Lake Arrowhead helped him greatly as the water was kept cold during filming in order to keep the alligators lethargic.

Crabbe also produced, invested in, and starred in his own live aquatic shows called The Aqua Parade. The actors he recruited were former aquatic athletes from his athletic days. In 1947, The Aqua Parade conducted a five-month tour of the United States.

By 1948, The Aqua Parade featured 20 synchronized swimmers in addition to divers and swimmers performing in the 2-hour show that included a show called The Evolution of Swimming. With popular acclaim, the show expanded from Los Angeles to Boston and included shows in Montreal and Toronto, eventually even to France and Italy.

In a key financial decision, Crabbe invested in a large portable swimming pool that moved with the show including to sites throughout the United States, Canada, France, and Italy. This enabled him to perform where he wanted as opposed to being tied to a permanent pool or missing his winter swimming in Lake Arrowhead. 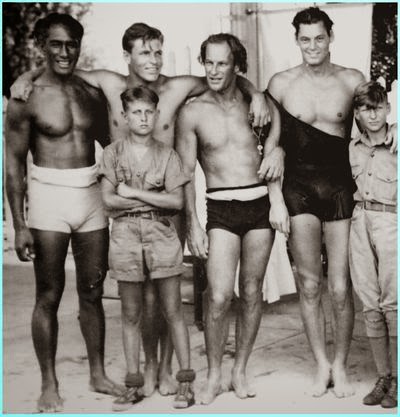 From Tarzan to Flash Gordon, from Billy the Kid to Wyatt Earp, Crabbe continued to play a number of roles in television and film while staying in shape swimming. Since his early days swimming in Waikiki Beach where he grew up as a child to his winter swimming in Lake Arrowhead later in his life, Crabbe was an aquatic icon.