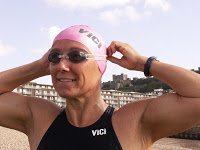 Penny Palfrey will soon be walking off the Oahu shore, perhaps into marathon swimming history if she finishes a 72-mile (116K) ocean swim between the incredibly rough Kaieiewaho Channel that separates the islands of Oahu and Kauai in Hawaii.

Penny’s final words to her crew, “Well guys, you know what to expect, please pack your sea legs.”

Based on Rick Shema‘s weather forecast, Penny will face an early window of calm winds closing down fast. “About 12 hours into the swim or about 11:00 pm at night, Penny should expect wind speeds to increase from ENE 10 knots or less to ENE 10-15 knots. Then it will increase further by 1:00 am to near 15 knots until it increases further in the 20-knot range towards the end of the swim.”

“The wind waves may start off as flat and then build to 5 feet from the ENE with northwest swells of 3-4 feet 12 seconds apart and a 1-foot south swell 15 seconds. Rain showers are expected to late evening as unsettled weather passes over the channel.”

As we head out in the channel with Penny, we will go into an unprecedented delay in further news reports until Penny is safely on Kauai hopefully by Thursday early evening local Hawaii time – or Friday for the rest of the world.

It is now Tuesday and we’ll getting ready for a truly audacious, awe-inspiring solo swim of unimaginable proportions in 78-81°F (26-27°C) waters.