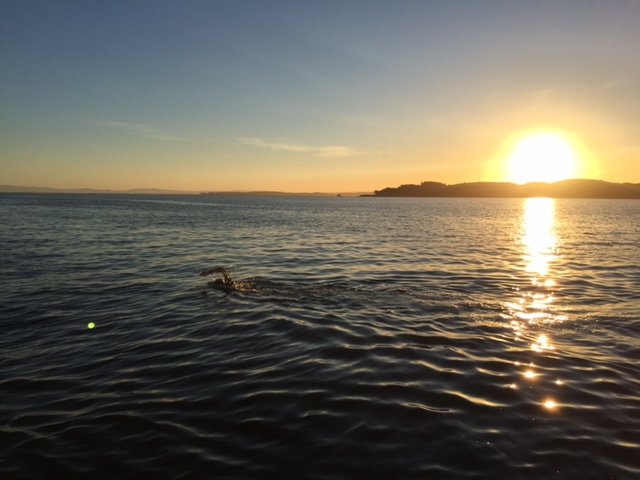 Isabelle Robuck recently wrote about A Day in The Life of a College Swimmer in Swimming World Magazine.

The physical exertion she describes, combined with the typical collegiate academic pressures, sounds exhausting. But if any college swimmer decides to do competitive open water swimming or marathon swimming after their graduation, concurrently while doing a full-time job or taking graduate school classes, then the high levels of physical exertion and mental pressures will not cease.

“One of the most strenuous, pressure-packed training and lifestyle schedules that I ever heard about was that of Kimberley Chambers when she was training for her 149 km solo swim down the Sacramento River in 2016,” remarked Steven Munatones. “Not only is Kim working in the pressure-packed corporate environment of one of the leading Silicon Valley firms (as the Community Engagement Manager, Sustainability & Social Impact at Adobe), but she also travels extensively as a motivational speaker.

Combine those more-than-full-time responsibilities with one of the toughest and most diligent training regimens in the open water swimming world, and college swimmers – even at her alma mater at the University of California Berkeley – seems to have it easy.

In preparation for her planned 93-mile, 45-hour journey from Sacramento to Tiburon (just north of San Francisco), she underwent a sleep-deprivation regimen in addition to her normal training and fulfillment of her corporate responsibilities.

Munatones added, “She had to prepare herself physically and mentally to swim through two nights of cold, numbing exploration of her physical and mental limits so she did her twice-daily workouts: the early morning workout in a local pool before going to work, and an evening practice in San Francisco Bay after office work was over – each and every day.”

But what was more impressive was her Friday-to-Saturday training session, essentially a 40-hour acclimatization training period.

She woke up as normal before the sun rose on every Friday morning and do her usual morning pool workout. Then, she dressed and went to work in downtown San Francisco in her typical 10-hour day. She then ate dinner and headed to the bay to start swimming once the sun went down.

And she would swim and swim and swim. She literally swam through Friday night past midnight and into the dark pre-dawn Saturday morning hours. When the sun arose on Saturday, she kept relentlessly swimming non-stop for up to 12 hours straight. 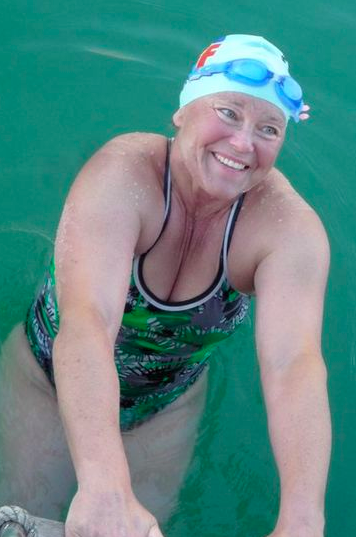 She did this week after week, month after month in the summer of 2016. Even after completing her Friday-morning swim-work-eat-swim ritual until Saturday morning, she forced herself to stay awake. “I avoided going home and taking a nap.” Instead, Chambers continued to be active throughout Saturday until she could withstand no more and went to bed – soundly – by Saturday night around 9 pm.

That kind of training – of the mind, soul and body – is repeated worldwide by many other working women who are marathon swimmers extraordinaire who also have pressure-packed jobs. Mothers like Angela Maurer and Cecilia Biagioli on the FINA professional circuits as well as women like Elizabeth Fry and Jaimie Monahan in the financial services sector, and Pat Gallant-Charette and Dr. Marcy MacDonald [shown on left] in the medical field. have similar focus, dedication, and a killer work-training-parenting lifestyle.

All are impressively inspirational.