Women Waste No Time In First Half Of 10K 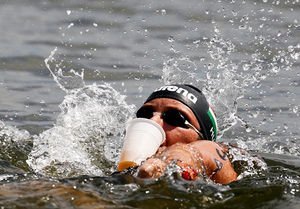 As predicted, the 52 women from 32 countries are wasting are no time. At the start of today’s 10 km world championship race in Barcelona, the women are characteristically efficient, focused, and fast.

None perhaps more so than 2-time Olympian Keri-Anne Payne. After marriage, a lay-off, and the disappointment of her fourth place finish in the 10K marathon swim at the 2012 London Olympics, Payne is back and swimming well.

But so is her arch-rival Éva Risztov, the Hungarian who upset Payne in London (shown drinking).

Taking a page out of the British playbook, Risztov blasted out towards the front and pushed the pace throughout the 10 km 6-loop race in the Serpentine last summer. This summer in Barcelona, she is sticking to the plan under the flat-water, no-wind conditions this afternoon.

Right from the start, the two superstars looked streamlined and confident in their lead-from-the-front strategies, navigational skills, and tactical plans. But unlike London’s relatively straight 6-loop course, the Spaniards laid out a more technically difficult course with many more turns that place demand on the women’s navigational IQ and ability to position and pace themselves for 2 hours.

All the expected front-runners are sticking to their game plan. Christine Jennings, Angela Maurer, Melissa Gorman, Olga Beresnyeva and a whole crew of fast-flying women are cruising behind the Hungarian and British Olympians during the first half. The women swam the first 2 km at around 24 minutes to give an idea of their speed and intent to make this race hurt (aerobically).

Relatively speaking, the scrum at the feeding platforms was mellow and the swimmers separated themselves in an orderly scramble in order to get their feeds in the sweltering conditions (30ºC air, 26ºC water was reported). Yet yellow cards have been called with the first given to Poliana Okimoto of Brazil.

At the 5.1 km mark, Risztov hit at 59:39 with others like the Italian pair of Martina Grimaldi and Rachele Bruni moving up on the heels of the leaders.

More to come for the exciting conclusion of the women’s 10 km world championship race from Barcelona. [The final race results and summary are posted here.]