Wood Is Strong As Steel 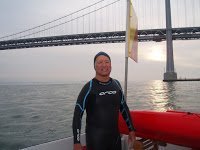 Vincent Wood is a retired executive from California who formerly owned a steel fabrication business. The 75-year-old former Marine is now enjoying his retirement years as an open water swimmer in the Pacific Ocean up and down the coast of California.

“I swim because I find it is the only exercise I can do reasonably well. Due to back problems several years ago, my legs are shot, so running and walking are out of the question.

Years ago, when I was much younger I participated in the Maui Channel Swim and the Waikiki Roughwater Swim, but shoulder problems ended my swimming for about 20 years until I got total replacement of both shoulder joints. One replacement is 10 years old and the other is 8 years old. I had the procedure done in Oakland by a surgeon who is known over the world for his expertise in this procedure. I am a testament to his work.
.”

Sometimes Wood dresses in black (neoprene) but his interest is being comfortable and enjoying himself without the pressure of competition. “Swimming in the ocean is so much more enjoyable than cranking out laps in a pool. The pool is good for stroke perfection [as] I find my freestyle is a work in progress. Swimming in the ocean without a wetsuit is a great way to feel the endorphin rush that comes with exercising. I usually try to swim at least a mile. It is doable without a wetsuit until the water temperature drops below 55°F (13°C).”

Born and living in Santa Barbara, he travels north to San Francisco to do at least five swims per year. “The place is so unique. Where else can one swim with that scenery? I have swam the Golden Gate three times and find the visuals swimming under that bridge next to those great towers almost a spiritual experience. It is hard to describe.”

But it is not just the allure of the water that attracts him to the famed bay under the Golden Gate Bridge. “The people who swim at the South End Rowing Club are very encouraging and a real kick to be with. San Francisco has some other good people leading bay swims like Water World Swim and Swim Art. I have swam with all of them.”

When he remains at his picturesque hometown, he swims at either East Beach or Goleta Beach together with the Santa Barbara Ocean Ducks. “We get together on a very casual basis three days a week at noon and once a week on Sunday for ocean swims. Since everybody swims at different speeds we get separated pretty fast. I swim by myself at East Beach and just tell the lifeguard what route I am swimming and when I plan to return.”

Swimming in the ocean is always an adventure…and then some…sometimes recalled the California native. “I was swimming off in Santa Barbara one day when a big dark seal swam under me. I got a big adrenalin rush when I saw him. I was scared until I realized it was [just] a seal. We have had two deaths due to sharks in Central California; I am aware there is a danger, but driving to the beach is more dangerous.”

While many individuals swim far, others challenge themselves in extreme temperatures, and others compete in all kinds of races around the world, men like Wood are the solid backbone of the sport. Enjoying themselves, staying fit, understanding the risks and being great ambassadors for a sport built at the grassroots.