Words That Have Totally Different Meaning In The Water 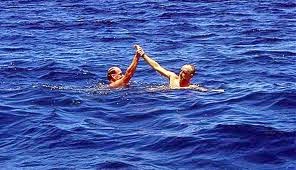 There are numerous common words that have totally different meanings when you talk with an open water swimmer compared with the rest of humanity:

Feeding: To stop and take a drink, slurp a gel pack or eat something rapidly while treading water next to a boat, pier, pontoon or kayaker

Pilot: A mariner who points you in the right direction and keeps on staring at you throughout a channel or marathon swim

Grease up: To put skin ointment, sunscreen, lanolin on one’s skin, under your armpits, face shoulders, back, near the groin

Non-stop: To swim for long distances while stopping for regular intervals

Pulling: To grab the water with your hands in order to push backwards behind you

Kicking: To move your legs up and down in the horizontal position

Hardened: To be acclimatized to cold water and be able to swim long distances in inhumanly unbearable cold water

Fish: a shark (alternatively, The Man in the Gray Suit, Mack, Old Toothy, Garbage Can of the Sea, The Landlord)

Two-way: a double crossing of a channel

Bloom: group of jellyfish that is sometimes called a smack, swarm or fluther

Circle pattern: pool swimming etiquette when there are more than 2 swimmers sharing one lane

Dead fish: an award given to the last person to finish in an open water swim

Home water: the open water swimming location or venue where a swimmer is most comfortable and familiar with the elements, conditions and marine terrain of the open body