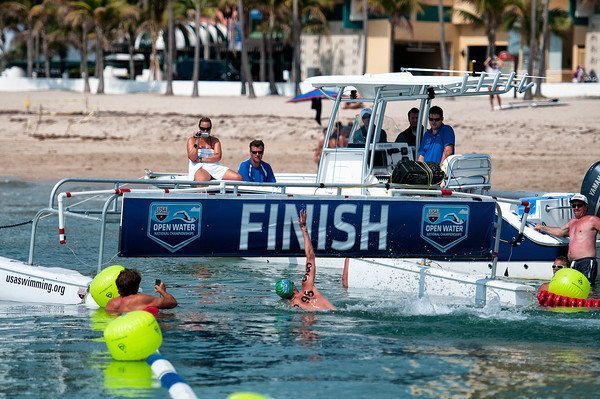 USA Swimming will have its largest annual open water swimming extravaganza next week in Castaic Lake in Southern California.

With scenic rolling hills surrounding the venue, Castaic Lake presents a gorgeous amphitheater where all eyes will be on the athletes.

Starting on May 15th, Canyons Aquatics and the Fran Crippen Elevation Foundation will sponsor the first of seven H2OpenPlus Summer Sunset Series races.

The series event will feature the Fran Crippen Mile that will consist of one lap around the National Championship course. In addition, series participants can swim a 3.3 km swim, a 400-meter swim and a 100-meter swim for 5-10 year olds, and can register here.

On the men’s side, all eyes will be on Olympian Alex Meyer who will be surrounded by a tough field including open water stalwarts such as 2012 Olympian and 2009 world championship 10K silver medalist Andrew Gemmell, 2005 world 10K champion Chip Peterson, and Germantown stud Arthur Frayler. But guys like Joey Pedraza, Michigan teammates Sean Ryan and Ryan Feeley, Team Santa Monica teammates Jordan Wilimovsky, Brendan casey, and Nicholas DeVito, and Mission Viejo Nadadores teammates David Heron, Janardin Burns, and Daniel O’Connor will not for a moment let anyone develop too large of a lead on the field of 38 open water gladiators.

Flat water, warm-water conditions, and a clearly laid-out course will prove a fast-moving field where the outcome may hinge on those swimmers who can handle the physicality and swim conservatively until the race breaks open with 3-4 km to go. The last loop of the qualification race will undoubtedly see major changes where some very strong representatives will emerge.

On May 18th, an open water swimming clinic led by 2008 Olympian Mark Warkentin is open to swimmers and coaches interested in everything from triathlons and channel swimming. Registration for the clinic is here.

On May 19th, the 5 km national championships will be held in the same venue as all the athletes will be working on realizing their own dreams.

The 10 km World Championship Qualification races will include the following athletes: