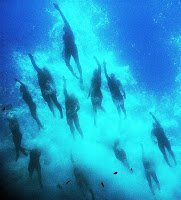 At Multisport World in North Bethesda on March 27th, Steven Munatones, a coach at the 2001, 2003, 2005 and 2007 World Swimming Championships and coach at the 2004 World Open Water Swim Championships, will give a presentation on The Tactics of Open Water Swimming where he will describe what the the world’s best open water swimmers look for, think about and do during major international open water races and its implications for triathletes looking to improve the swim leg of their race.

Steven will show videos from recent world championship races while pointing out specific racing tactics of Olympic medalists and world champions. He will provide a detailed underwater analysis of their navigational, sighting and drafting techniques – information that is typically only shared with elite athletes.

Attendees will learn how these open water swimming tactics can be practiced in the pool and then utilized when racing in any form of multi-sport event involving the open water – plus, it’s free and it’s hard to get a better bargain than that.