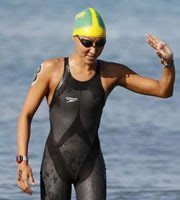 The official results of the global World Open Water Swimming Woman of the Year poll, won by Poliana Okimoto of Brazil for her successful and consistent record as a professional marathon swimmer on the FINA World Cup circuit, were tabulated and confirmed – and are shown below.

With 21,275 online votes cast by fans from over 150 countries around the globe, Okimoto overwhelmingly won the online poll:

And Okimoto certainly demonstrated those traits.