Wounds Heal And The Memories And Stories Remain 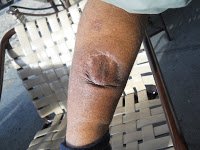 Michael Spalding of Maui and Linda Kaiser of Oahu shared their experiences with sharks, box jellyfish, Portuguese Man-o-War, currents and waves during their two-decade history of crossing nine Hawaiian Island channels. They will soon appear on Open Water Wednesday together with stories that will surprise, educate and motivate both the seriously-minded channel swimmer and those who simply enjoy the freedom and challenge of open water swimming.

Photo shows the lasting cookie cutter shark wound on Michael‘s calf – a remnant of the world’s only attack of such a shark on a human. During Michael‘s Big Island of Hawaii to Maui solo crossing, he was attacked at night by a cookie cutter shark that came up from 1000 meters. With Linda on his escort boat, they both tell an incredible story of survival in the dark at night in rough seas in the middle of the Pacific Ocean when Michael was bleeding profusely with the sharks around him.

Their history in the Hawaiian Islands is a true story not to be missed.