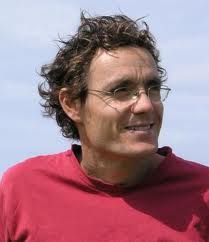 Simon Griffiths knows an emerging sport when he sees it.  But the former freelance triathlon writer wants others to appreciate open water swimming in its many guises as he does: as a lifestyle, as a healthful exercise that challenges the mind and body, as an activity that is shared with a profound level of camaraderie and collegiality that crosses borders, ages and cultures.

The embodiment of his vision is H2Open Magazine, the world’s only magazine dedicated to open water swimming.

After one year in publication with sales, influence and advertisements constantly growing in a down economy, Simon and his team has more than over-delivered.

Highlights of incredible athletes, features on special events, technical information from dryland training to nutrition, and articles on specific aspects of the sport from sharks to wetsuits, H2Open Magazine is a dream-come-true for open water swimming enthusiasts.   For putting together an international team, financing and a distribution network, Simon Griffiths has increased the awareness and excitement in the sport and is a worthy nominee for the 2011 World Open Water Swimming Man of the Year.