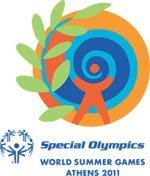 The Special Olympics World Summer Games offered open water swimming for the first time in its history.  The inherent danger, the potential risks and the numerous issues involved in putting individuals with intellectual disabilities in the sea were overcome by a team of committed volunteers in Athens, Greece.

The  1.5K world championship event in the Bay of Marathon in the Aegean Sea was won by Andrew Smilley of the Cayman Islands and Cornelia Fowler of South Africa where 35 athletes from 19 countries safely competed.  The athletes raced passionately and showed the world that well-prepared intellectually disabled athletes can perform well in the open water.