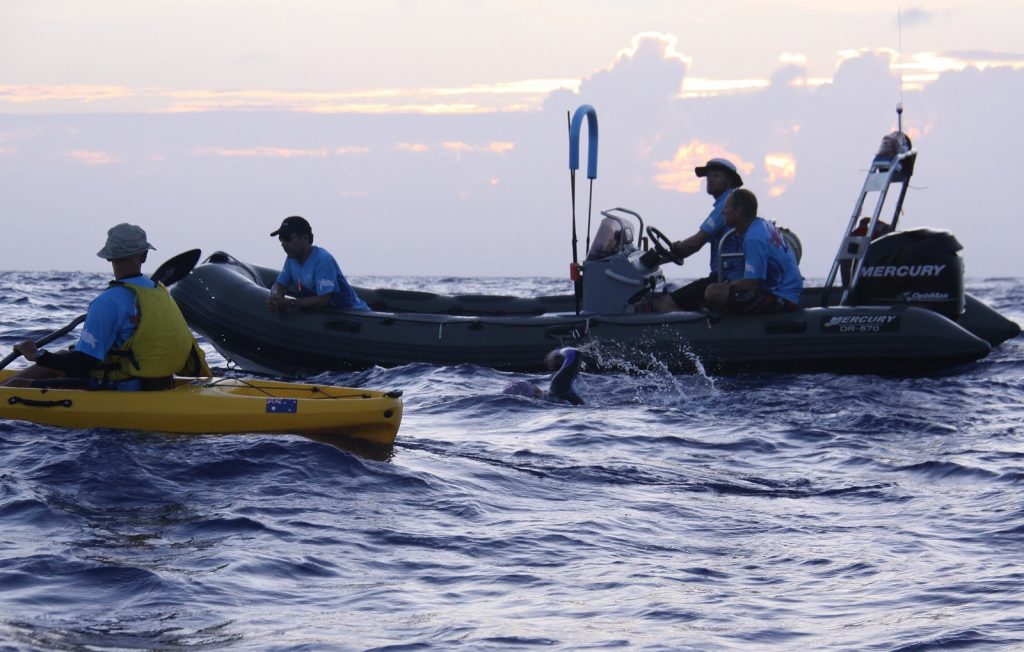 Penny Palfrey wanted to do something outrageously difficult.  Something unprecedented and unheard of.  Something that captured her imagination and pushed her to the very outer reaches of her potential.

She selected a stretch of water 14,615 kilometers from her home in Queensland, Australia – the outrageously beautiful Cayman Islands in the Caribbean Sea, south of Cuba and east of Mexico.

She teamed up with the Flowers Group and Red Sails Sports working with the best mariners and most knowledgeable Government representatives in the Cayman Islands.  Together with a hand-picked crew of 46 people from 8 countries, her crew plotted and planned a two-part swim under the leadership of Frank Flowers and Red Sail Sports.  She first swam 5 miles (8K) between Cayman Brac and Little Cayman.  A few days later, she swam 68 miles (109K) from Little Cayman to Grand Cayman.  Her swim was never easy as ocean swells and surface chop plagued her, the entire 40 hours and 41 minute journey.  With her crew and the Cayman Islands Government at her side, she braved the waters of the Caribbean to capture the imagination of the nation.

For her courage in attempting the unprecedented and for the coordination demonstrated by the local team, Bridging the Cayman Islands is a worthy nominee for the 2011 World Open Water Swimming Performance of the Year.

For more information on the Bridging the Cayman Islands, visit here