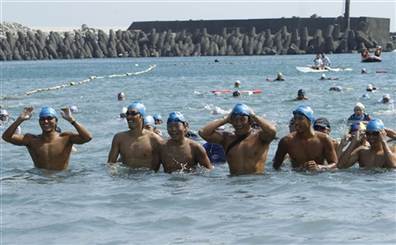 The Japan to Taiwan Ocean Swim Challenge (日台黒潮泳断チャレンジ) was a 6-person, non-stop relay of 120 kilometers from Okinawa, Japan to Suou, Taiwan.  The swimmers included Kazuya Suzuki, Atsushi Suzuki, Masaya Shimizu, Kenta Ishii, Haruki Yamamoto and Kouhei Yamada who swam to honor the support of the Taiwanese people who came to the financial and operational aid of the victims and survivors of the disastrous earthquake and tsunami that hit Japan in March 2011.

The 6 swimmers braved the strong Kuroshio current, roving sharks, jellyfish and rough conditions over 50 hours to successfully complete this unprecedented swim.   For their sincere efforts to raise money for their fellow citizens, for the ¥7 million (US$93,000) donated and for the boldness of an ambitious country-to-country relay swim, the Japan to Taiwan Ocean Swim Challenge is a worthy nominee for the 2011 World Open Water Swimming Performance of the Year.

For more information in English and Japanese on the Japan to Taiwan Ocean Swim Challenge, click here.