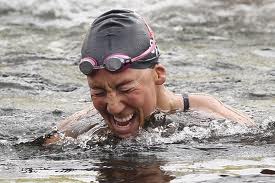 Swann Oberson was ready to quit swimming, but not before she gave it one last shot to qualify for the 2012 London Olympics.

At the 2011 World Swimming Championships, Swann did qualify for the Olympics and established herself as one of the dark horses to stand tall on the Olympic 10K Marathon Swim podium on August 9th 2012 in Hyde Park.  But that swim of her lifetime in the 10K where she placed 9th was just a precursor to her heroic gold-medal performance in the 5K.

Barreling down the final straightway, sandwiched between two rivals, banging and going stroke for stroke, Swann’s decade-long dream came true.  When three swimmers with their heads down, simultaneously shot their hands up to smack the touch pad, it was a classic photo-finish.   Several tense moments later, Swann exploded with tangible elation for claiming Switzerland’s first world championship victory in the open water.  For her commitment to the sport and belief in herself, Swann Oberson’s 5K world championship victory is a worthy nominee for the 2011 World Open Water Swimming Performance of the Year.