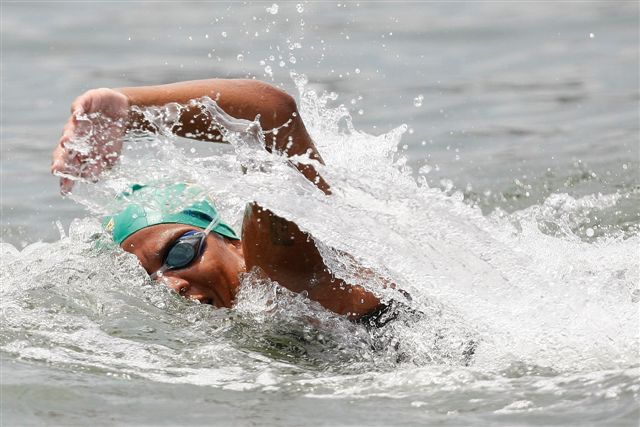 Ana Marcela Cunha had dreams of returning to the Olympics after she finished fifth in the Olympic 10K Marathon Swim at the 2008 Beijing Olympics.  The 16-year-old was only 5 seconds outside the bronze medal in the 2-hour race.  But she missed out on her second Olympics by a mere 4 seconds at the 2011 World Championships in Shanghai.

Disappointed beyond belief, Ana Marcela could have been excused if she wallowed in self-pity.

But the dynamo from Brazil simply enjoys the open water and heated competition too much.  She quickly picked herself up and finished 7th in the 5K race at the world championships.

Incredibly, two days later, she entered her third race at the world championships and earned an extremely hard-fought 25K victory.  Brazil’s first world open water swimming champion proved that defeat and disappointment are only temporary with the proper mindset.  Her victory put an exclamation point on her season, replacing a frown with a bright smile.  Weathered and exhausted, but unyielding under the pressure of her vaulted rivals and inhospitable 32°C water, Ana Marcela Cunha proved herself a worthy nominee for the 2011 World Open Water Swimming Woman of the Year.