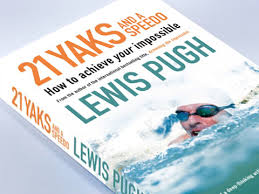 When a book’s first page before the Table of Contents states, “In accordance with the Official Secrets Act, the names of the soldiers of the British SAS, and the places in which they served, have been changed to protect their identity,” we know we are going to immensely enjoy the read.

But with such an introduction, the books are almost always military-oriented adventures that pit good guys against the bad guys in war-time recollections.

It is rare – unprecedented – that this kind of foreword sets the scene for a book about a swimmer.

But 21 Yaks and a Speedo is that unprecedented book and Lewis Pugh is that kind of rare individual; a British-born swimmer who has done unprecedented swim while leading a life where the unexpected can be expected.

21 Yaks And A Speedo is a book can be read by young tots in elementary school looking for a fun read or veteran warriors interested in adventure. The book offers 21 chapters, each colorfully describing Pugh’s strategies and exploits both on land and in the water. Each chapter provides clear lessons on how readers can set about physically and mentally to achieve their own impossible. His chapters describe his swims everywhere from Antarctica to the Arctic. The chapters are entitled Channel, Vasbyt, Escape, Visualise, Mind, Blame, Believe, Push, Follow, Grind, Test, Open, Hope, Break, Strive, Plan, Switch, Trust, Change, Stand Up, and Dream.

“Every chapter offers lessons that would work well in an audience of teenagers or retirees, athletes or non-athletes, pool swimmers or channel aspirants,” said Steven Munatones who will attend Pugh’s induction to the International Marathon Swimming Hall of Fame ceremonies this coming October in Cork, Ireland. “Each page provides an easy-to-grasp gem of wisdom that can be applied in school or work, in training or competition, with a team or as a soloist. Throughout 21 Yaks And A Speedo, Pugh takes the readers along his journeys from the bottom of the Earth to the very top of the planet. His style is a quick-reading, profoundly inspirational, first-person insight of his unique experiences where he has had to vasbyt.”

Vasbyt, an Afrikaan word that has no equivalent in English, is one of the concepts that can be easily applied and understood by open water swimmers the world over. Pugh explains, “Vasbyt means bite down hard. Don’t quit. Keep on going.”

Keep on going, Mr. Pugh. Yours is a life well worth leading.