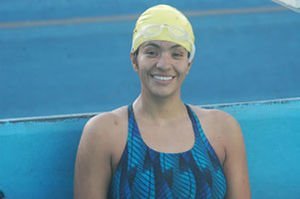 Yesenia Cabrera Fuegos of Guatamala is gradually climbing up the Oceans Seven rankings.

But it is never easy.

After departing from the Papohaku Beach on Molokai at 4 pm, she swam through the night cross the Molokai Channel as she finished on Oahu at 8:50 am yesterday morning.

After swimming through light winds most of the night, there was a bit of drama just before dawn. Cabrera became disoriented and started to swim in circles. Around and around she went, but her crew got her back on track once the sun came up. Her pace increased and her strength returned with the sunrise over the Pacific Ocean.

The 41-year-old needed every bit of energy and speed she had for there was a high surf advisory on the eastern shores of Oahu. Her finish was the renowned body surfing Sandy Beach. With pounding surf, Cabrera was able to swim into shore on the Makapu’u side of the main Sandy Beach to complete her fourth Oceans Seven channel.

“She saw no marine life during her swim across the entire Kaiwi Channel and was not stung even once by jellyfish,” reported Linda Kaiser. “She said this swim was very hard, but the water was warm.”