You Can’t Make It If You Don’t Try 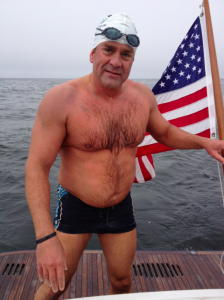 The Farallon Islands got the better of Joseph Locke again last night.

In his third courageous attempt, he made it further than he has ever gone before, nearly 25 miles, but came up short at tackling the mighty Farallones and its demons.

Despite an effort that made his crew proud in the 11ºC (53ºF) water, Captain Vito Bialla and his support team pulled him from the lumpy Pacific Ocean 4.5 miles from the California mainland.

“He’s back on land and OK,” reported Bialla.

“He was in the water a total of 10 hours 54 minutes, relentlessly stroking away at 72 strokes per minute, but he got sick 4.5 nautical miles out. It was an amazing, amazing effort. He never complained and never wavered.

Suddenly with 4.5 nautical miles to go, he stopped looked at me and said, ‘Vito I dont feel so good.’ We wasted no time getting him out. He is not one to complain so when he had enough or doesn’t feel good, you take it serious.

The Farallon swim is not child’s play, nor is it a sprint . We think it is the toughest swim on the planet. Hats off to Ted Erikson who actually died once for 18 seconds on his second attempt. Joe will be back, we have no doubt.”