But even without man’s recklessness, there remain man-made hazards in the open water. During large swells, heavy turbulence, storms or simply lack of maintenance, buoys, lobster traps and channel markers can wash towards shore and pose a threat to any one in their path.

On nice days and even not-so-nice days, boats are a great way to enjoy the ocean. These boats sail, motor, and cruise in the water with fantastic views of the shoreline.

While most boaters are aware of the local boating regulations in their area, a few of bad seeds are ignorant of both the local rules and the universal rules and fundamentals of safe boating. When these safety guidelines are ignored either purposefully or unknowingly, boats can become extremely hazardous to open water swimmers.

For these reasons, local governments enact laws and guidelines to protect other marine enthusiasts. In Southern California, boats cannot come within 1000 feet (305 meters) out of the surfline. Swim Areas and No Boating zones are off limits to these boaters and can result in large fines.

But even with these existing regulations, lifeguards rescue many boats every year From entering the surf line when they become disabled close to shore. The 1000-feet regulations in Southern California helps reduce the risk of hazardous situations between motorized watercraft and swimmers while also giving more time and opportunity to prevent being caught inside the surf line due to breaking waves and more time to be rescued,

Similar to the West Coast of America, Florida has municipalities where pencil buoys mark off a certain section of beachfront which is acceptable for swimming and off-limits to boaters. The designated swim areas can vary at each beach depending on the conditions and local regulations. At some beaches, information on the designated swim areas are posted along the shoreline by signs and flags.

The signs and flags can be in different colors and shapes, from red and white signs to black ball flags.

In the State of New Hampshire, new state laws give swimmers and kayakers the right of way in open bodies of water in New Hampshire. The background of that legal separation is here. 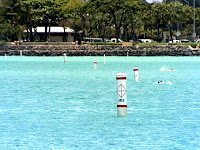 The state of Hawaii has designated separate lanes for swimmers and stand-up paddlers at its popular Ala Moana Beach near Waikiki on Oahu. “A full year has passed [since the test was first initiated] and the corridor seems to have served its purpose, separating stand-up paddlers from other ocean-users and greatly reducing the risk of injury due to overcrowding,” said William Aila Jr., Department of Land and Natural Resources director. “We were getting complaints from paddlers about swimmers and from swimmers about paddlers, so we settled on a corridor to increase safety,” said spokeswoman Deborah Ward.