You Will Never Be Forgotten

Different sports, different personalities, but similar types of champions who had similar work ethics while making themselves and others around them better. 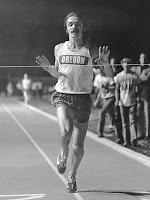 Not just medalists. Not just winners. Not just highly competitive athletes. But individuals who touched the lives and hearts of many.

Steve was an American middle and long-distance runner who once held the American record in the seven distance track events from the 2,000 meters to the 10,000 meters, but who tragically died at the age of 24 in a car accident.

Steve came off the last turn or head into the last lap always ready to give it everything he had on the track. Similarly, that is when Fran, known as the fastest closer in the business, made his moves in the open water (see video below showing him winning his last national championship in Long Beach, California).

A memorial is located at the location where Steve died and reads as follows:

For your dedication and loyalty
To your principles and beliefs…
For your love, warmth, and friendship
For your family and friends…
You are missed by so many
And you will never be forgotten…

Apropo for Fran, too.