Yuko Matsuzaki To Be Honored In New York City 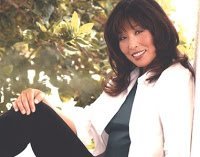 Yuko Matsuzaki became the first inductee from Japan in the International Marathon Swimming Hall of Fame when she was voted in the Class of 2010/2011.

Born in Tokyo, Yuko has been training in Florida throughout her marathon swimming career. As the daughter of a long-time mariner and head of the Japanese Coast Guard, Yuko has a strong navigational DNA and a deep love of the open water.

Yuko will be recognized for her career in a special induction ceremony in New York City on June 19th. The Japanese Queen of the Seas has been a professional marathon swimmer and ambassador of the sport for over two decades. She completed dozens of marathon swims in several countries around the world – always with a smile on her face before and after including when she set two solo records in Lake Cane, Florida with an 82K non-stop swim in 29 hours and 55 minutes and an 83K non-stop swim in 33 hours and 24 minutes.