Zhang Jian’s Hometown Is The Ocean 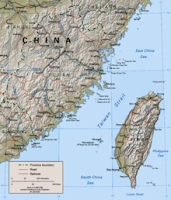 Zhang Jian of China hopes to become the first person to swim across the 141 km (87.6 miles) Taiwan Strait. “It would be a dream come true,” said the Sports Director at Beijing Sports University who idea was first born when he swam across the 29.5 km Qiongzhou Strait in 1988.

Zhang would like to promote more cross-strait long-distance swim events knowing that the annual Sun Moon Lake International Swimming Carnival in central Taiwan draws over 25,000 participants annually. “Because the Earth’s surface is 70% of oceans and lakes, oceans and lakes have considerable appeal. Oceans rapidly change with ocean currents and water temperature dynamically changing every moment. Because everything is not the same, I need to be completely prepared to test my response and capabilities to the environment.”

But Zhang‘s approach is strategic as his career at the Beijing Sports University. His course across the tricky, windy Strait filled with aggressive marine life includes a flotilla of escort boats with supplies. His advance preparations are considerable and comprehensive based on his previous marathon swimming experiences. “Although the challenge is done in nature, we must approach [the swim] in a very scientific and rigorous manner.”