Ziggy And Canine Swimmers Around The Open Water World

Ziggy And Canine Swimmers Around The Open Water World 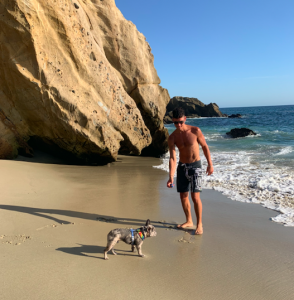 “We first did some dryland exercises (fetch) with Ziggy on the dry sand, then his owner Nadim Zoghbi started to throw the ball further and further in the surf,” explained Kelly.

“Gradually, we did more ins-and-outs with Ziggy, a French bulldog. He was tireless going in and out of the water. We finished off his main workout with some sprints into the beach through the surf so he improved his bodysurfing techniques.“

Ziggy joins a long line of canine swimmers that compete in organized open water swims, serve as ocean lifeguards, and simply enjoy the open water like their human owners.


Samut Songkhram frequently does his short-sprint training with his Golden Retrievers in Thailand. 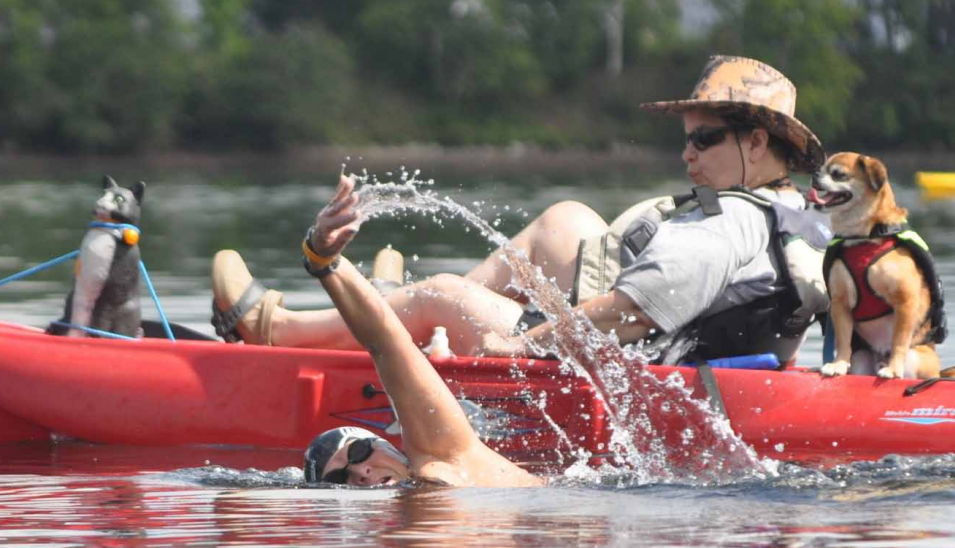 Phil White of the Northeast Kingdom Open Water Swimming Association frequently hosts canine support crew like Picard. Picard is shown above looking out for Paula Yankauskas together with owner Deb Beier swimming in the Island Pond Swim in Vermont.


The history of canine swimmers competing in open water swims and other venues goes back at least to Manaia, a Labrador-Irish setter, that swam faster than 400 of the 922 human entrants in the 1980 Waikiki Roughwater Swim, completing the 2.4-mile swim in 90 minutes across Waikiki Beach in Hawaii.

One of the epicenters of canine swimming is Huntington Beach in Southern California, just north of where Ziggy trains, but there are many other renowned canine swimmers around the world:

* Digger from Orlando, Florida who completed over 100 Lucky’s Lake Swim.

* Robbie, a Labrador, has saved his fellow canine friends.

* Barney is from Sarasota, Florida.

* Jake from La Jolla, California who finished 72nd out of 500+ open water swimmers at the Alcatraz Invitational in San Francisco.

* Massi, a Newfoundland, serves as a canine lifeguard in Ostia Beach, Rome.

* Rambo, a Labrador, serves as a canine lifeguard in Ostia Beach, Rome.

* Romeo, a Labrador, serves as a canine lifeguard in Ostia Beach, Rome.

* Udaine, a Belgian Shepherd, serve as a sniffer dog in South Africa.

* Butch, a Labrador cross pointer, serve as a sniffer dog in South Africa. 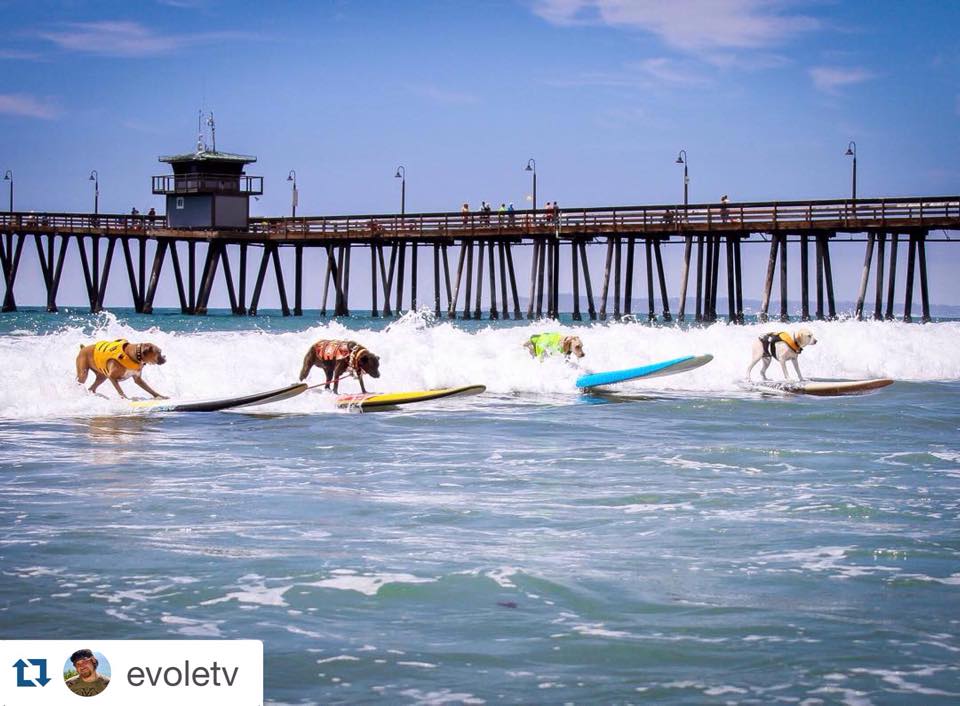 Similar to canine swimmers, surfing canines often compete in the annual Petco Surf City Surf Dog® Competition. All surFURS compete with other dogs in the same weight class. The top three or more dogs in each weight class will advance to finals. 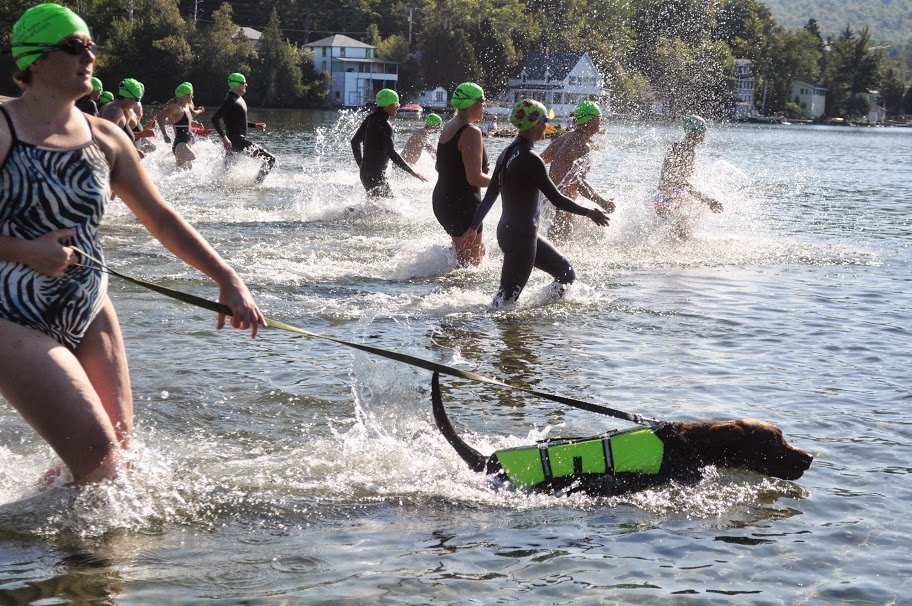 But perhaps the most experienced canine swimmer is Guri Bosch, a 5 km veteran of the Lake Willoughby Swim. 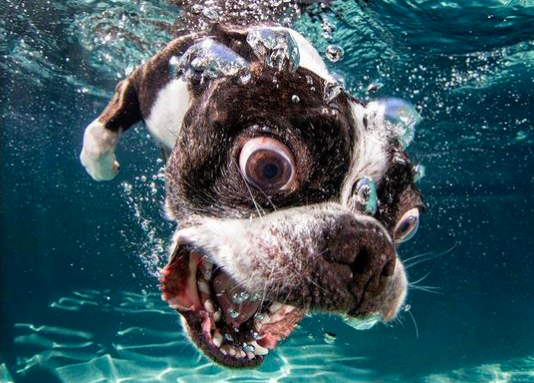 If you are a dog lover and you love the open water, these dogs have the potential for being your next best open water swimming friend:

* The Newfoundland breed was originally a popular working dog where they were asked to tow lines from ship to land in choppy seas and rescue swimmers. There was a time when Newfoundland dogs were required at lifeguard stations along the British coast.

* The Chesapeake Bay Retriever is a great water retriever that can swim and dive into very cold water with their nearly waterproof dense undercoat and a rough, wind-resistant outer coat.

* English Setter, originally bred as a bird dog to retrieve game in English moors, is at home in the water.

* Irish Water Spaniel was originally bred as a sporting dog and water retriever with a double coat that helps resist harsh outdoor conditions.

* Irish Setter, a combination of the English Setter, the Pointer, the Irish Terrier and the Irish Water Spaniel, loves the water.

* Portuguese Water Dog was used to herd fish into nets, retrieve lost fishing equipment, and act as a boat-to-boat or boat-to-shore courier.

* Labrador Retriever is a great swimmer with genes of the Newfoundland and Labrador from the Atlantic coastal province in Canada near the Labrador Sea.

* Golden Retriever was originally bred as a hunting companion for retrieving waterfowl.

* Nova Scotia Duck Tolling Retriever was originally bred in the southern region of Nova Scotia to lure and retrieve waterfowl.

Seth Casteel is an award-winning photographer and a New York Times best-selling author of Underwater Dogs, Underwater Puppies, Underwater Babies, Pounce, It’s a Puppy’s Life, and nine books. In 2012, his series of photos showcasing dogs diving into swimming pools reached over 100 million people in less than 24 hours. With over half a million copies in print around the world, Underwater Dogs is one of the best selling photography books of all-time.