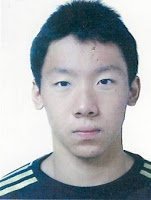 The two men went at it the entire 10K, right down to a photo finish.

“I’m exhausted,” Zu said. “My opponent is extremely strong. I’ve met Mohammad before at the world championships and the Olympics. Winning had to do with my coach’s plan for the race. My coach told me to swim according to the water and keep it steady, and when the time is right, attack.”

The final results of the men’s 10K competition were as follows:

After the competition,Iraq’s marathon swimming coach Faisal Saeed Jaffer Al-Hussaini commented on the sport, “In Iraq, when I start my car in the morning to go to training, you have to believe you may not be coming back. But we still train. We want to do this, to improve and to prove to the world that we are free Iraqis.”

After his 5K win earlier, Mohammad forecasted the 10K race, “It’s a beautiful feeling and a bigger achievement than two years ago, as there were a lot of strong opponents in the race. Winning the championship is easy, retaining it is harder.”